Campaigns allow you to track and report on activity related to a particular group of text messages. Once created, a campaign is automatically shared and accessible to all users in your Cadence team (including the associated reporting and statistics of the campaign).

All users in Cadence have the ability to:

After learning the basics here, check out the articles on  best practices and reporting for insight and ideas on how to use Campaigns the most effectively.

There are sections below on:

The easiest way to create a campaign is to head to the campaign area on the left, and click [ New Campaign].

Thankfully, there are not a lot of options you need to be concerned with.  Aside from the name of the campaign, which should be a succinct overview of what the campaign will be used for.

The description will appear in the reporting for the campaign, and provide more context on the purpose and use of the campaign. 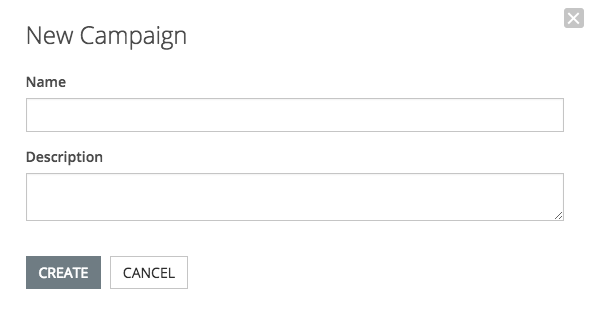 A new option is available when composing a message. If you would like to track a message as part of a campaign, check the Track as Campaign box. A list of all your campaigns will appear, and you can type to search for a specific one. 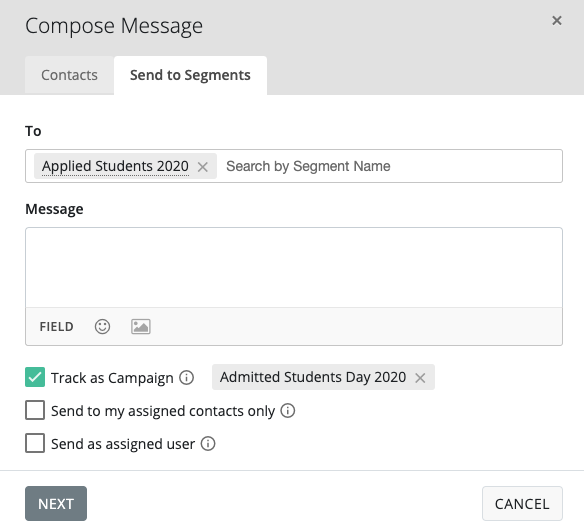 If you have not already created a campaign, you can create one on the fly by typing in the name you want and an [ Add Campaign] button will appear. It will automatically create an active campaign for you. 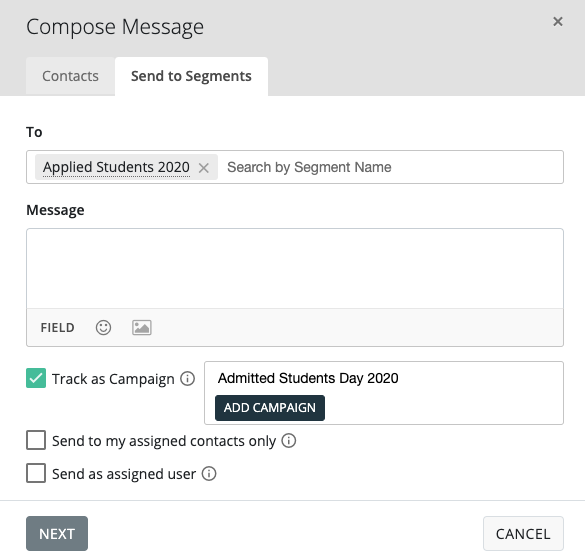 When a message is sent as part of a campaign, it is tracked and displayed differently when looking at the conversation with a contact.  In the example below, the message was sent as part of the "Fall Outreach" campaign and has the blue label with a megaphone below the message as an indication.

Any responses that come in from a contact within 24 hours will be tracked as part of the same campaign, as shown below:

It's also possible that you'd like to change the categorization of an incoming message.  Let's say you get the following response:

You probably don't want this message to roll up as part of your reporting for this campaign - it wasn't even the right contact!  If you hover your mouse over the campaign label, you'll see a small  x appear:

Clicking that x will remove the campaign from that incoming message. In its place, a small + will be available. This will let you re-categorize the message with a different campaign if necessary.

Note that if you respond to one of the automatically tracked campaign messages, your response and any subsequent responses from the contact will not automatically be tracked as part of the campaign unless you tag your response as part of the campaign. If you do, any contact responses received within the next 24 hours will continue to be tagged as part of that campaign. For more information on how to effectively manage campaigns and conversations, check out the article on  best practices.

Archiving a campaign will essentially archive it from use, without deleting the underlying data collected.

You can filter between Active and Archived campaigns by using the drop down.

The list of campaigns will include any campaigns you have created, along with any campaigns that have been created by other users. This is indicated in the Owner column in the list.

If you select a campaign that was created by another user, you'll be able to associate messages with it and view reporting, but you will not be able to edit its name or other details

Did this answer your question? Thanks for the feedback There was a problem submitting your feedback. Please try again later.