When you create a new message by clicking on Compose, the Preview step will provide you with an estimate of the "delivery duration." The duration show corresponds to how long it will likely take for the entire message to go out (i.e., how long it will take for all of the recipients to receive the message). 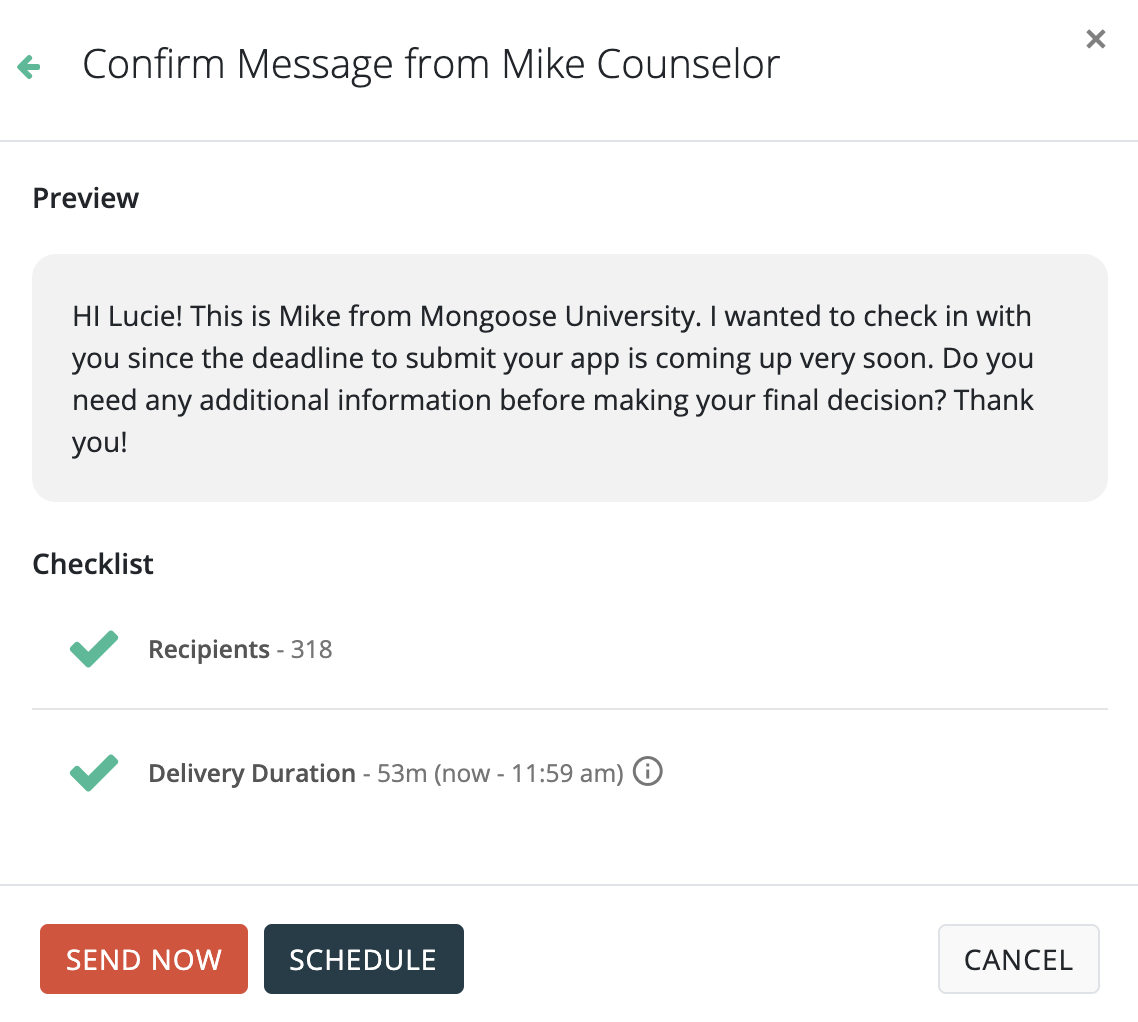 The estimate shown is usually accurate, however, it is important to be aware of a few other factors that could impact the sending time.

- If you are sending to thousands of recipients at once, there is some "spin up" time that is included in the sending time estimate, as it will take a couple of minutes to actually queue up the request to send to that many recipients.
- If multiple messages are scheduled to send during the same time period (overlapping times), the messages do not queue up one behind the other. In fact, this will slow down all of the outgoing messages for the user or shared inbox because multiple message batches will attempt to send at the same time and throttling is still preserved. Use the Scheduled Messages area to review your team's upcoming sending schedule to avoid issues with overlapping send times (more info here: https://help.mongooseresearch.com/article/526-scheduled-messages-guide).

For example, if you schedule a message to go out to a  segment of 5,000 contacts at 8 a.m. and then schedule another message to 5,000 contacts to send at 8:02 a.m. that same day, both messages will take significantly longer to send than if you queued them up one behind the other.
- If multiple messages are scheduled to send at overlapping times, it will also impact when each message batch is logged as “complete” under Messages > Sent (or " Shared Inbox Name" > Sent) because Cadence does not mark a sent message batch as "complete" until the final message in the batch is sent out. Applying this to the scheduling example above, it could seem to take a lot longer for most of the messages in a message batch to send than it actually did.
- If the scheduled messages are also smart messages, this further impacts the sending time because the sending queue has to include auto-replies as well, perhaps while other scheduled messages are still being sent out.

Best Practices and Tips for Teams

Users within teams should work together to ensure scheduled messages do not overlap, especially if they are being sent to the same contacts. Use the Scheduled Messages area in the navigation on the left hand side in order to track and review upcoming sending activity within your team and plan out your sending strategy and schedule accordingly.

Sending messages to large segments of contacts should generally be planned in advance in order to ensure that incoming responses to the messages can be answered in a timely fashion, without overwhelming the user(s) that will be responding.
We suggest sending "time sensitive" messages during a time when no other messages are scheduled to send.
Did this answer your question? Thanks for the feedback There was a problem submitting your feedback. Please try again later.